Christian Stark, Class of 2015, is a man of many talents; some remember him as the Homecoming King, some for his athletic abilities, others for his winning smile, but his greatest attribute is his match-making expertise.

A match made in Wesleyan, the wedding that occured on Dec. 5th between Spanish teacher, Gabi Martinez, and Stark’s cousin, Cameron Grogan, would not have happened if Stark had not been certain that these two would be perfect for each other and would not stop until they knew that too.

Christian Stark was Martinez’s student in three different classes, and after getting to know her, he realized that he had the perfect man for her, his cousin. When a teenager sets two people up, it is usually just for fun, but unlike the usual high school set up, this relationship resulted in a marriage. Stark talked to Martinez during his free period, telling her that he had someone for her to meet. Stark says that Martinez was reluctant when he first introduced the idea, but Stark went along with his plan anyway. He told his cousin that there was a teacher that he should call and gave him Martinez’s phone number. Cousin called Martinez and set up a coffee date, and it “went well from there.”

Grogan decided to ask Martinez to marry him on Wesleyan’s campus because the people at Wesleyan played such a big role in Martinez’s life and in their story. Stark helped Grogan by bringing roses to Martinez’s classroom, saying that Grogan had dropped them off for her for Valentine’s Day. He then told her that there was another surprise waiting for her and that Martinez needed to follow him. Stark lead Martinez and her class up to the quad, where Grogan was waiting with a letter and a ring. After Martinez read his heartfelt letter, Grogan got down on one knee and asked her to marry him. The students exploded into cheers and cries for the happy couple, and a few student ran to the intercom to announce that “Mrs. Martinez just got engaged!” The engagement between Grogan and Martinez is a beautiful memory on Wesleyan’s campus.

The wedding took place on Dec. 5th on a magestical avocado grove in Florida, and Stark was a groomsman in the wedding. Martinez was a stunning bride to no surprise, and her and Grogan’s first dance as husband and wife was “You and I” by John Legend, sung by Martinez’s cousin, Enrique De Solo. Congratulations Mr. and Mrs. Grogan! 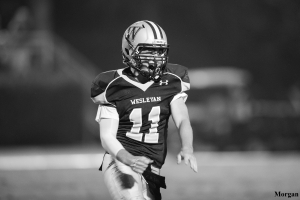