Art is essential in our world because it allows for vulnerable expression, emotional and physical outlets for the creative and communication that breaks the barriers of time, language and culture.

Even though art is so prevalent in society, there is little recognition for those brave enough to expose their art for others to admire and judge. This article is dedicated to those courageous high school students who have decided to share their art and ideas behind it with their community.

Although many artists put a lot of thought and time into deciding how they would like the world to perceive their art pieces, sometimes it turns out differently than they originally intended, usually for the better.

Jackson said, “The message I’m attempting to convey in this piece is that from war comes peace, and from peace can come war. I think that war has the potential to get to a point when it is so destructive that the end goal of ‘peace’ for either combatants is no longer a motive; the war is just… war.”

Jackson said his piece “originally started as a book sculpture, but, as [he] began exploring this idea and planning out how [he] wanted the end result to be perceived, it became apparent that this project wasn’t meant to be limited to books. As a result, the concept was altered and the piece was created into what it is now.” 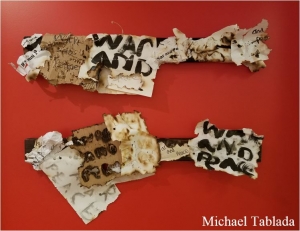 Likewise, junior Sarah Moon created a piece for her AP art class that was “originally just [a] pallet for another one of [her other] paintings.” Moon said, “A lot of work and thought went into it, more so than my other ones, and at the same time no thought went into it.”

Moon was explaining that even though a lot of physical and artistic effort and ability went into this piece, “the point of [the piece] is to have no meaning.” Because Moon feels that because so many deep meanings behind art pieces are disheartening and depressing, she likes to keep her art “lighthearted to make people smile.” 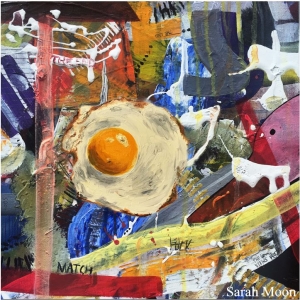 Even though art is a way to express your thoughts, emotions and beliefs, Moon thinks that if you “throw yourself into something that makes you feel good” and “have a sense accomplishment,” it is all worthwhile, even if there is no deeper message behind the piece.

While some art pieces are created for the sole purpose of producing a smile on the viewer’s face, others do have a deeper intended meaning behind them.

Senior Grant Marshall created a piece that illustrates a bright, green bonsai tree on a pedestal in the middle of a blank, white and seemingly forgotten garage. When asked about the piece he created, Marshall said, “[it] is about focusing too hard on one area of your life, so the others parts fall into disrepair and fade away and the danger that comes with it.” Marshall created not only an intricate and artistically strong piece, but he made a notable statement as well. 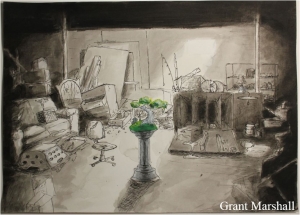 Another one of Marshall’s pieces is an altered self-portrait that depicts his face under construction with the scaffolding still up. Marshall said the piece is about “creating an identity for yourself, something that many people my age struggle with as they chose who they want to be.” 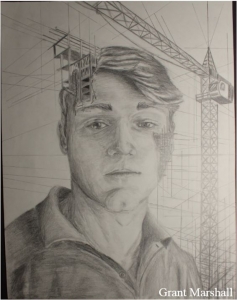 Sophomore Olivia Curran also conveyed a message with a coil pot she sculpted last year. She completed the pot, then “carved large jagged sections out of the clay and made holes for the leather lacing to go through.” The piece was not created for functional purposes, but to portray a message that is larger than the art piece and the artist herself. Curran said, “This pot [represents people] holding it together, even when things start breaking apart as shown by the leather lacing keeping the clay together.”

Curran drew her inspiration from the struggles and strength of people, but other artists may be inspired by song lyrics, nature, or their need to express something that cannot be expressed in words. 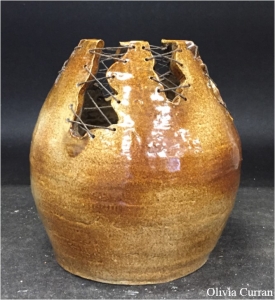 In his Advanced 2D art class this year, junior Tyler Sommer found inspiration in songs’ lyrics and created a 3D black and white painting of a one-horned mask held down by strings. Underneath each string, Sommer spelled out lyrics from various songs.

Sommer said, “The strings symbolize choices or temptations that can pull you in a wrong moral direction. While the lyrics underlie the strings like shadows, you can look closely and see that [some] lyrics… deal with an inner monster that threatens to take over, while [other] lyrics… provide a message of inner strength to fight against your demons.”

“Through these conflicting lyrics, the one that trumps them all is a simple phrase: cut the cord,” said Sommer. “This is a calling to cut the cords that either hold you back or pull you in the direction of bad choices.” 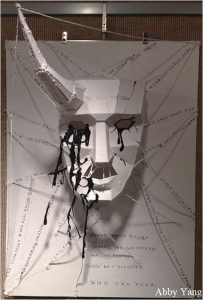 Junior Lily Rudder also created a piece for her Advanced 2D art class depicting a field of colorful and textured flowers popping off the canvas in front of a layered mountain range under a cloudy, pastel sky. In the center of the field is a single television.

Rudder said, “The main idea behind my art project was that people should always strive to live in the moment. In society, people are so absorbed in technology and materialistic things and never take the time to just take a step back and enjoy the world without distractions. By being distracted by society, people are really missing out on the true beauty of our world.” 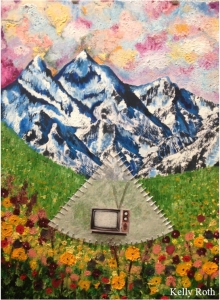 And even when a project is assigned with a prompt, which puts restraints on a piece, the creativity and critical thinking of these artists still show through. When assigned by her Advanced 2D art class to “[design] a composition representative of a personal statement” using her visual voice, junior Grace Halley created a piece inspired by the love and protection of God.

She depicted herself sleeping peacefully in the hands of God even though masses of shadowy creatures, representing lies, fear and deceit, are enclosing around her. Halley illustrated this by intentionally using dull tints in the background to “represent the evils of the world” and bright, textured materials and colors for the hands of God, “contrasting God from sin [to make people see] him for the loving God that he is.”

Halley said, “Coming from a family of seven, I worry a lot about my brothers and sisters and what could happen to them if or when I’m not there… Of course, I always remind myself that God’s in control, and everything that happens is part of his plan and will.” She finds peace in knowing that she will always be safe in God’s hands. 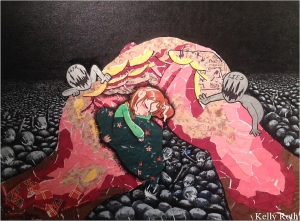 These artists and their pieces have changed the perspective and worldview of the art’s observer.

The Art Students at Wesleyan are talented and have showed their talent in many ways: photography,

Three months and thousands of deaths later, the Coronavirus is still making
As all pet owners know, our pets are the greatest part of
The Coronavirus outbreak is making people all around the world question what
Throughout life, people go through ups and downs. In America currently, and
In the midst of the coronavirus pandemic, schools all across the country
Go to Top