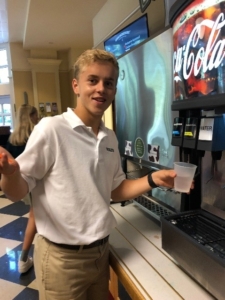 END_OF_DOCUMENT_TOKEN_TO_BE_REPLACED

New Years is the time of the year where people all around the nation try to make this upcoming year the best year yet, by making resolutions, like working out, starting a new diet, journaling, growing a relationship with someone, or overcoming a trial. When asked, the students and faculty at Wesleyan School what their New Year’s Resolutions were and how they planned to make their 2019 the best year yet.

END_OF_DOCUMENT_TOKEN_TO_BE_REPLACED

From exercising, to learning a new skill, there is no better time to make a resolution for yourself than the

As December arrives quickly, Wesleyan students find themselves stressing over their final exams and report cards. A familiar feeling that

The date was set and plans were made; all of humanity wanted to know what was in Area 51: aliens?

There are three letters that associate LeBron James, Stephen Curry and Kyrie Irving together: NBA. This year for the NBA season, the biggest game changer for both the Eastern and Western conference was LeBron James joining Lonzo Ball and the Los Angeles Lakers after several years of playing with the Cleveland Cavaliers.

According to NBA statistics, as of Jan. 15, LeBron James has an average of 27.3 points and an average of 8.3 rebounds per game during his time with the Lakers (ESPN). He, however, is recovering from an injury which does not permit him to play with his team on the court.

END_OF_DOCUMENT_TOKEN_TO_BE_REPLACED

During the winter season, Yancey Gymnasium is filled with boys and girls playing one sport: basketball. The boys’ and girls’

The new year has many technology upgrades in store for Wesleyan faculty, students and the IT department. After three years

Going to college is a scary new experience, but when graduating from Wesleyan, alumni can have the confidence that there

In the United States, and now many other countries, February has been nationally recognized as Black History Month for 42 years. The month-long celebration and informative holiday expanded from Negro History Week, which took place during the second week of February, beginning in 1926.

END_OF_DOCUMENT_TOKEN_TO_BE_REPLACED

Grayson Ragsdale What colleges are you applying to? Duke, Dartmouth, Davidson, Princeton, Vanderbilt, UGA, Berry and Washington and Lee Who

Wesleyan’s mission is to strive towards offering service however possible. Service comes in many different forms and for various reasons.