The senior girl’s father daughter dance that took place on Saturday March 9 and was a night for everyone to remember. In years past it has been a time where daughters would bring their dads to Dubose Dining Hall for dinner and a movie in Powell Theater. This year was the first ever senior girls father daughter dance. END_OF_DOCUMENT_TOKEN_TO_BE_REPLACED

Stevie Crawford What college are you applying to / going to? Montana State, Wofford, Furman, Colorado College, U of Wyoming.

Going to college is a scary new experience, but when graduating from Wesleyan, alumni can have the confidence that there

Every year, the National Charity League recognizes senior girls and their family for their commitment to improving their community. According

What college are you applying to / going to?

Who was your first Wesleyan crush?

What was your most embarrassing Wesleyan moment?

One time I ran into the Plunks and every faculty fellow at Chipotle my sophomore year. This encounter was embarrassing as it was Halloween and I was fully committed to my costume. My costume of course, was the Ghost of George Washington. Naturally, I dressed up in a very conservative ghost costume and powdered wig that hid any shred of my identity. I looked like a little boy and quickly took off my wig for each teacher to greet them.

What is one thing you wished you had done in high school?

If you had 24 hours left to live, what would you do?

Probably throw a quick pity party, then get Chipotle and see where the wind takes me.

I always thought it would be cool to be a dolphin trainer at Sea World, but that hasn’t panned out yet, so we’ll see. END_OF_DOCUMENT_TOKEN_TO_BE_REPLACED

With 45 million players worldwide, “Fortnite” has become the most popular video game on the market. The online shooter was

This year, not only will juniors and seniors be writing articles for the Green and Gold, but sophomores will now

Alex Morgan What college are you going to/ applying to? UGA, Auburn, Alabama, Clemson, FSU and GCSU. Who was your

From singing with the Ragsdale sisters and dancing to “High School Musical” with junior dancers to an epic poetry slam by Ben Smoke and Russ Foust, it is clear that Wesleyan’s Got Talent. END_OF_DOCUMENT_TOKEN_TO_BE_REPLACED

The Wolf Players traded their green and gold for black in their production of “The Addams Family” on Feb. 6-8.

Savannah Sommer What college are you applying to / going to? I’ve applied to UGA and Georgia Tech. Who was 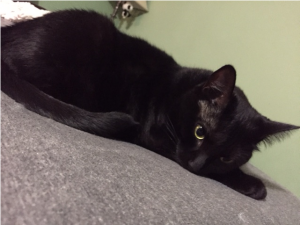 Watson Copeland: “My ‘phat’ cat, Wallace, eating my socks because we are trying to make her less obese and can’t find food anywhere. Also, when Wallace munches on my headphones. You know how much money I’ve spent on headphones? Too much. Don’t get me wrong, I think Wallace is awesome and hilarious, but she is really teeing me off lately.” Watson Copeland.

END_OF_DOCUMENT_TOKEN_TO_BE_REPLACED

Savannah Sommer What college are you applying to / going to? I’ve applied to UGA and Georgia Tech. Who was

Many private schools across the nation, including our very own Wesleyan, requires their students to wear uniforms to school every single day. Uniforms allow peace of mind when choosing an outfit and they are more time and cost efficient. School uniforms allow a sense of unity and community between the students and represents the school as a whole. By having a mandatory uniform dress code it poses less of a bullying risk and a higher sense of equality between students.

Uniforms are something that I personally love. In the morning or the night before school there is no stressing about what you are going to wear. If you pick out something that is considered ugly or weird there is a risk of bullying from other students, thus bringing down the students’ self-esteem and confidence. However, with uniforms there is no hassle of picking out an outfit. You wear the same thing every day and there is no one to judge you. If everyone is wearing the same thing there is less of a risk of bullying based on clothing choices. Uniforms also allow getting ready for school easier which means more time to sleep in, which is something everyone wants. Having uniforms creates a level playing field among students. There is no pre-determined judgement based on the type of clothes you wear, unless you decided to add some unique pieces to spice things up.

Having school uniforms also saves people an exorbitant amount of money. We all know the craze of back-to-school shopping and how crazy and expensive it can get. Everyone wants to show off their new, expensive clothing to their classmates on the first day of school. Clothing does not come cheap, especially for the latest and greatest things that every kid wants. These pieces eventually add up into hundreds and hundreds of dollars. But with the use of school uniforms, you buy a few skirts or pants and a couple shirts and you are set for the entire year.

With the focus off what you are wearing, there is more of a focus on education. The National Association of Secondary School Principals states “When all students are wearing the same outfit, they are less concerned about how they look and how they fit in with their peers; thus, they can concentrate on their schoolwork.” With everyone wearing similar clothing there is less of a distraction and it creates more of a professional feel.

Uniforms also do not totally take the sense of expression from the student. Students, even with uniforms, are allowed to express themselves through jewelry, ties, and hair styles. The Seventeen and TeenVogue websites list numerous suggestions for students on how to add their personal style to school uniforms. These include hairstyle options, nail polish options, and the addition of colorful accessories such as scarves and socks. Accoring to TeenVogue  “there are tons of ways to amp up your standard issue getup.”

Junior Bishop Bryant said, “I like the peace of mind uniforms give me when trying to find and outfit for school. It allows getting ready for school in the morning so much easier.” With having mandatory uniforms comes a lack of expression that other schools have, but the pros outweigh the cons. Uniforms save money, time in the morning, the risk of bullying, and gives a sense of unity that is incomparable.

Uniforms are the worst for two reasons: people cannot express their own opinions through clothing and it is so annoying to do something or wear something if you are forced to do so. I love to wear my own clothing, whether that be something super casual or something on the more fancy side. I always like to dress to impress. Wearing uniforms hinders that ability for me because I am restricted to wear a certain set of clothes every single day, due to Wesleyan uniform policy. Often times, I will want to wear a really cute item from my closet, but then I remember that I cannot do that because I have school and must abide by the policy and not wear that said clothing item. It really frustrates me! The First Amendment states that all individuals have the right to express themselves freely, but how can people do so if they are restricted and held to such high standards of uniforms? During the late 1960s, there was a popular court case, Tinker v. Des Moines Independent Community School District, which prohibited the children to express themselves with their clothing as a form of protest of the Vietnam War, stated that expressing support or protest for various causes, like the Vietnam War, is inappropriate in school settings.

Many times there is a stereotype, specifically in Hollywood Films, that if you dressed a certain way you were either popular, nerdy, athletic or so-on and if you did not meet that stereotype, then you were bullied. This needs to stop because study can still get bullied. Bullying is at a rather high risk because if you are not up to par with sports or academics, it is more noticed and therefore you can get bullied. No uniforms helps people establish themselves, the stereotype can be broken and the common misconception of regular clothes at school can be very beneficial.

As well as bullying, the economics of a school are higher when the school has a uniform policy. Many of the big named uniform companies are completely thriving off of sales coming from schools with uniforms. People pay for the uniforms because in order to attend the school, people must go and spend more money to boost the economy of the school and of the partnership schools have with the big named uniform companies, such as Lands’ End. The fact that uniforms are so expensive is a huge barricade to people from wanting to go to certain schools strictly because they do not want to spend more money on clothes.

Uniforms in private and public schools do not allow the students to express themselves through their induvial rights. People are more likely willing to go to schools without the uniform policy because of money or individuality. Do not let economics or America’s First Amendment yield the number of students at your school! Cancel uniforms and all will be well.

Grace Tyler What college are you applying to / going to? UGA, Auburn, Virginia Tech, Santa Clara and Clemson. Who

At the culmination of a long and successful year in journalism, the journalists wanted to celebrate the end of the